The Proverbial Dragon in the Room...or Webathon as Community Building/Art Installation 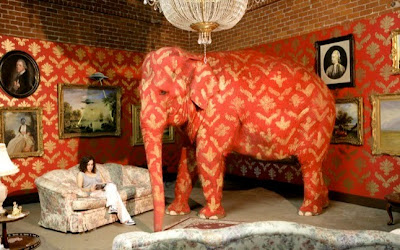 I recently received an envelope depicting a child with a disfigured face. It said something like, “donate and we’ll stop sending you images like these.” As noble as cleft palate surgeries are (literally enabling children to smile), that kind of guilt trip is unconscionable and just makes me want to ignore the problems in the world.

I’m fundraising to purchase a sixty-foot-long cloth dragon costume/chandelier. On the surface it’s highly frivolous, but the dragon represents the opposite tack: the solicitous equivalent to positive reinforcement. “Chip in a few bucks and you get to see this thing.” As our business increases, it was worth its price in charity. Even though the vast majority of worldly problems will have gone unaddressed, unlike the elephant in the room, we’ll have done something—created a mascot for optimism.

Like Christo’s The Gates in Central Park, this dragon can be a memorable gesture that enriches the texure of a city. Well okay a city block, but without using 10 million pounds of steel, 1 million square feet of nylon and 900 workers. As we approach the goal, I can’t help but feel a sense of excitement for the tangible evidence of community building—sort of an urban barn-raising in the age of Twitter.

Besides, how often do you get a chance to buy a dragon?

http://www.kickstarter.com/projects/603393953/mission-chinese-food-dragon-remodeling-project
Posted by MSF at 12:30 PM