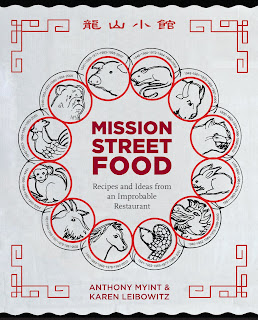 Congratulations! Good luck with it!

Loved the book, just reviewed it for RELEVANT Magazine. Here's the link: http://www.relevantmagazine.com/culture/books/reviews/26692-review-mission-street-food

This is one of the best cooking story books I have ever owned. The writing is warm, snarky and informative. I bought the book after a chance lunch at Mission Chinese Food -- I hadn't known the hallowed halls in which I was dining, but it was some of the most interesting/delicious/umami laden food I have ever had!

Thank you for all the sharing and inspiration!

Found the book at my local library in Tucson and LOVED it! What a great story, great writing, photos, and recipes. Wish I could have tried your Mission Burger!